A default configuration for a standalone Mulgara server runs a set of web services, including the Web User Interface. Once Mulgara has been started, the standard configuration puts uses port 8080, so the web services can be seen by pointing a browser on the server running Mulgara to http://localhost:8080/. Of course, when talking to Mulgara running on a remote host computer, then use that computer's name or IP rather than localhost.

The list of services in the default configuration is:

The tutorial is a set of pre-defined queries that demonstrate how to use Mulgara using TQL commands (TQL pre-dates SPARQL, and includes commands for modifying data). In the default configuration it will be at: http://localhost:8080/tutorial/. It should appear as shown here: 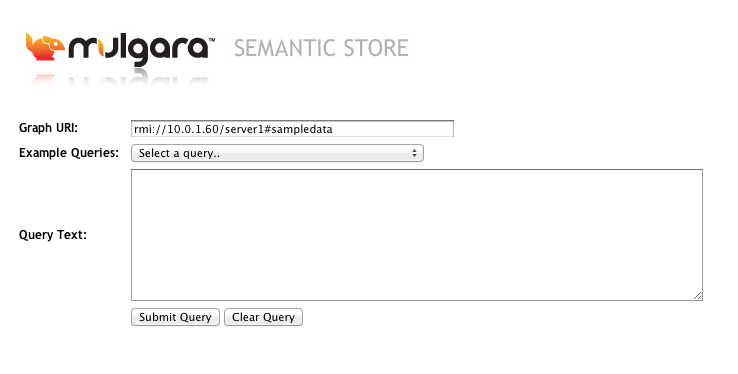 While it is possible to select these out of order, the suggested order will ensure that all required data is available when requested. If a selection is done from a non-existent graph, and error page will be shown. In this case, press the "Back" button on your browser and try another query. You are not restricted to the queries in the list, and tutorial will accept both TQL and SPARQL queries.

The data loaded in this tutorial comes from the Mulgara Jar files, and should always be available.

The User Interface link is directed at http://localhost:8080/webui. When you first start the page, it should appear as below: 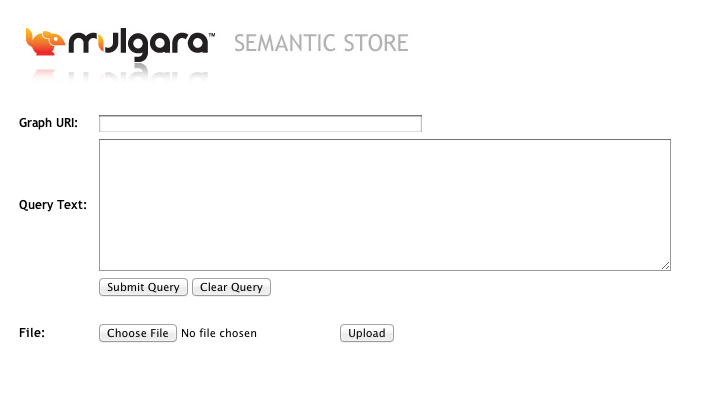 While the tutorial supplies a set of example queries, the Web UI page is used for general access to a Mulgara database. All queries and commands are taken from the Query Text box, and all responses are rendered to the page. Note that this is not the web interface to use for XML or JSON responses. Use the SPARQL HTTP interface and the TQL HTTP interfaces for these.

The fields on the page are described here:

Sets the default graph to use for queries, and is also used for specifying the graph to upload RDF files into.

If the Query Text field contains a query that returns a set of results that includes RDF resources, then each resource will be linked to a query for that resource in the graph provided here.

This contains a single command or query in either TQL or SPARQL.

SPARQL is currently a query-only language, and will always give a result set as a response.

A file selection that specifies a file to be loaded into a graph when the Upload button is pressed.